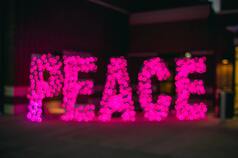 Blessed are the peacemakers

During this month, there will be gatherings across our villages to remember those who lost their lives or were seriously injured in war and armed conflict. On Armistice Day (11th) and Remembrance Sunday (13th), many of us will pause at 11 o’clock to remember. Something I find very moving is when - just before the two minutes silence is observed - the list of names is read out, in memory of those young men from our parishes “who, at the call of King and Country, left all that was dear to them, endured hardship, faced danger and finally passed out of mortal sight by the paths of duty and self sacrifice, giving up their own lives that others might live in freedom”.

Yet, as the years pass by, there are fewer people still alive who can share their personal experiences of what it was like to live through the Second World War. My wife Mary’s mother is someone who can, and it is moving to listen to her recalling what it was like living in the Devon seaside port town of Teignmouth which was targeted by the German bombers. She has vivid childhood memories of being woken in the night by sirens warning people to take cover, of the street where she lived being hit by stray bombs which devastated houses and the hospital, rather than the dockyard, killing her neighbours and friends, and of school lessons wearing gas masks, running home at the end of the day wondering if her family members were still alive and well.

Today, you and I live in a world which, sadly, is still no stranger to war. Indeed, we are all being affected by another European War - the war in Ukraine. Once again, we are made aware of how human conflict destroys lives and communities. Yet we also know – as history keeps trying to remind us – that evil must be confronted, whatever the cost. Whether Hitler or Putin, those who would impose their will on others by brutal force must be resisted and defeated.

The struggle for a better world continues. While we are not on the front line of current wars, nonetheless we do have a part to play in the struggle for peace with justice. As we remember those who have made the ultimate sacrifice, we can also resolve to be peacemakers - wherever we find ourselves in situations of disharmony and strife. That’s surely what we’re called to do if we seek to follow the Way of Jesus Christ. For Jesus says to all who would follow Him: “Blessed are the peacemakers, for they will be called children of God” (Matthew Chapter 5, verse 9).

With all good wishes,